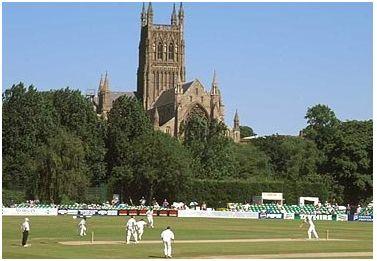 An influential figure in the development of Worcestershire County Cricket Club was Paul Foley, who came from a family of iron masters in Stourbridge. He began to involve himself with the club in about 1880, and had much to do with the development of the Minor Counties League, in which Worcestershire were highly successful during its formative years. The success at the Minor Counties level helped Worcestershire gain recognition and led to the team gaining acceptance into the County Championship and the first-class ranks in 1899.

Worcestershire County Cricket Club play their games at one of the most picturesque grounds in the world, New Road. With the Cathedral providing a stunning backdrop and cricket of the highest order, it is a great day out for all ages.

Cricket is played throughout the summer (when the weather allows), so please check the club’s website for the latest fixtures.